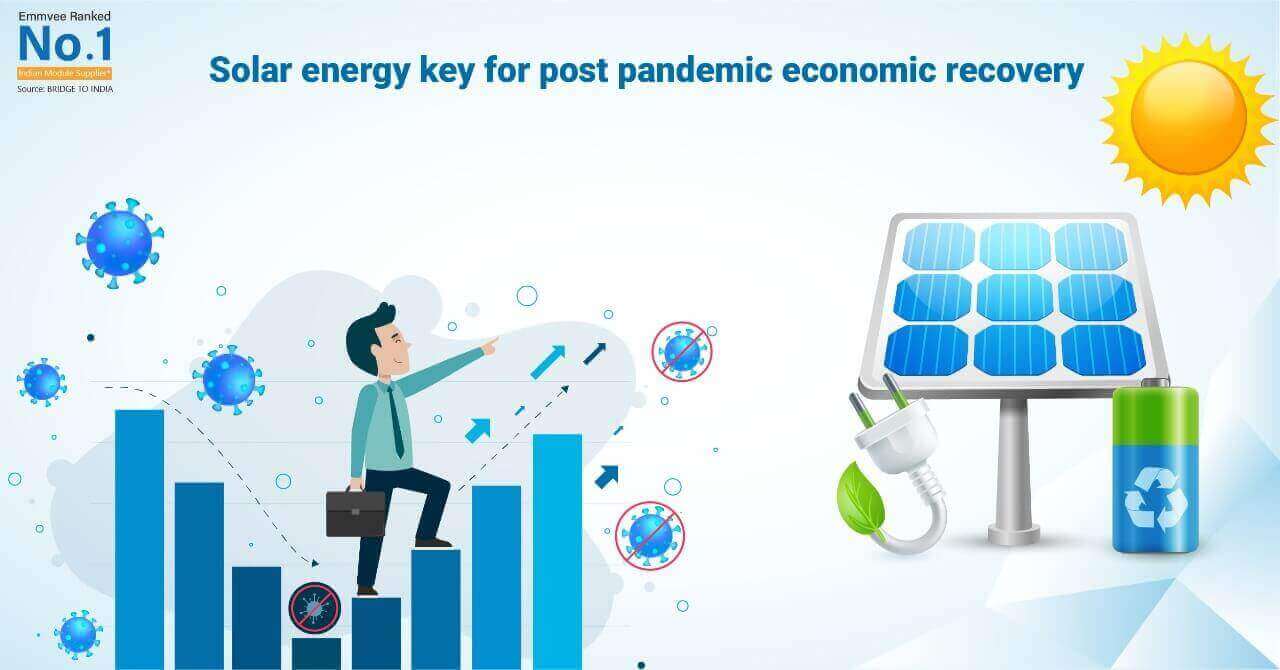 The covid19 pandemic has brought the whole country’s economy to a standstill. But on the hen side, the pollution levels have significantly dropped in the past few months. This situation raises serious questions on the extra effort needed to encourage and implement renewable energy for greater sustainability and its considerable benefits in the long term. Although renewable energy is not immune to the covid-19s it is more resilient than other fuels

Solar energy is definitely one of the viable options which can play a major role in reviving the India economy as it:

Shifting the focus to solar energy transition during this stage will create multiple employment opportunities as each new solar project requires people to execute and manage construction and maintenance related tasks.

The estimated employment for grid-connected solar PV projects in India was around 1,00,000 was  in 2019.The jobs for off-grid solar projects were estimated to around 90,000 in 2019 followed by around 20,000 jobs in solar heating & cooling systems and close to 60,000 jobs in solid biomass sectors.

Solar energy is the most suitable option to solve the present economic crisis, as it is the cheapest and cleanest source of energy that works under the right regulatory and policy framework when compared with conventional sources. Also, over the years the solar industry has witnessed many advancements in power storage technology, which helps to provide 24/7 uninterrupted power supply.

The covid-19 pandemic has really brought the focus back on the need for a cleaner and healthier environment with millions of deaths occurring due to infectious diseases caused by air pollution and climate change.

The only way to have a strong recovery from this situation is by adapting to solar energy, as it can tackle challenges related to both air pollution and climate change. The solar-driven recovery will lead to a more reasonable growth as it will not only reduce carbon footprints but will also improve access to energy, eventually leading to better living standards.

Investment in solar energy is a long term low-carbon transition strategy. The ever increasing solar installations have played a key role in the 20% carbon emission reducing which India has achieved in the last ten years.

Also, constant changes in the climate, high carbon emissions and global warming are actually making trees die younger which in turn increases carbon footprints. The increasing adoption of solar energy helps in reducing carbon footprints which invariably has an impact on longer lives of trees. When the trees have a longer life, they play a critical role in controlling the global warning.

India spends a huge amount of money on importing fossil fuels such as coal, oil, and gas. The very fact that in case this money is spent on developing solar parks and related projects will make  India not only energy sufficient but will also create a cleaner and eco-friendly environment.

The Covid-19 is an opportunity for the Indian government to boost the solar sector against fossil by providing subsidies to them that are currently allotted to conventional energy sources.

Farmers and small traders living in rural areas have played an important role in dealing with the covid19 crisis, as they are the major source of food supplies to the entire country.

Solar energy can play a very critical role in keeping them safe and healthy by providing power to hospitals and other health centers in rural areas to run ventilators and other medical equipment, where electricity supply is erratic.

Also, it is a viable alternative to electrify small industries, farms, and schools the remote rural areas.

The government along with big corporate should use their CSR funds to channelize the rural health sector in setting up solar hubs that can be exclusively utilized for hospitals, homes, and shops in rural areas.