Importance of solarizing cities in India

HomeImportance of solarizing cities in India 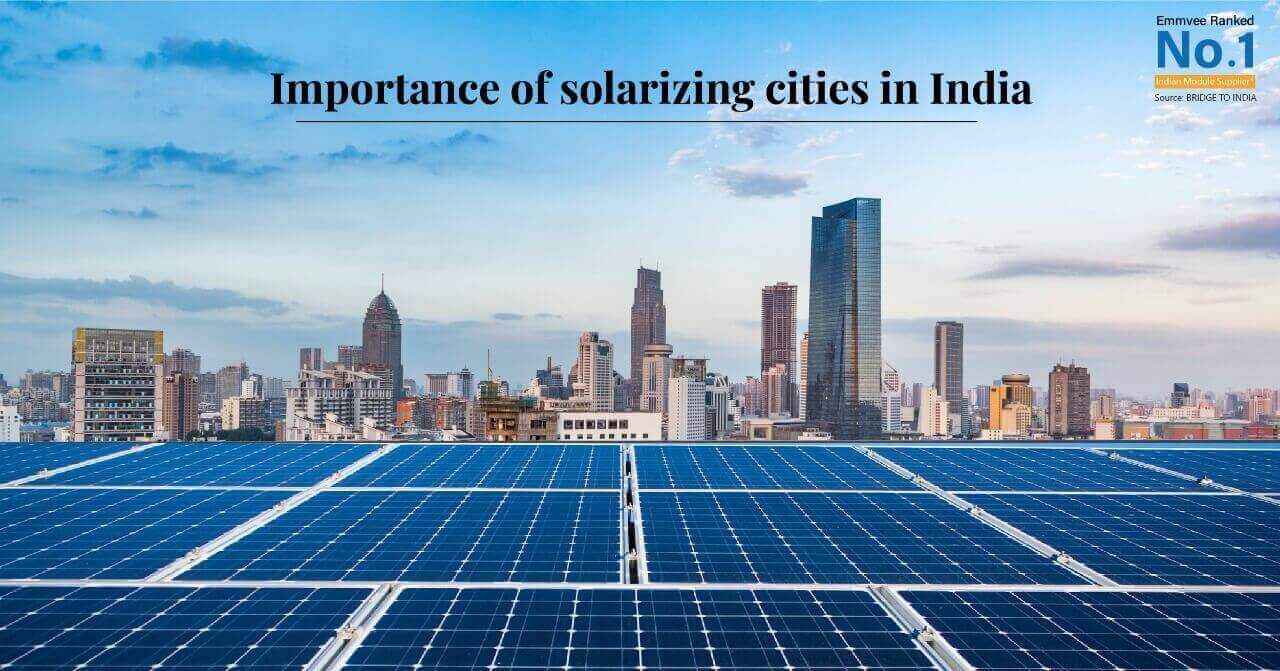 Importance of solarizing cities in India

India is moving towards rapid urbanization with a large amount of population getting concentrated in the cities, as they offer multiple social, economic, and technological growth opportunities. Therefore, it is important to take steps to plan and start solarizing cities and lay a strong foundation for building sustainable cities across India.

The Ministry of New and Renewable Energy (MNRE) launched the development of solar cities program in 2008, which was later modified in January 2014 keeping in mind the rapid urbanization and changing lifestyles which is increasing the demand for electricity in Indian cities.

Reduces dependency on conventional sources
Most of the technological advancements in the cities such as the traffic systems, logistics, data security, and modern buildings are all dependent on energy, which is mostly sourced through conventional sources such as fossil fuels, which are non-renewable.
To cater to all these energy needs, it makes very important to change the energy usage processes and create a strong solar energy resource pool as it is available in abundance and also is environment-friendly and economically feasible.

Solar enabled urban buildings
Commercial buildings depend on electricity for the majority of their energy consumption requirements and are the largest consumers of energy in any city. Also, amenities used in these buildings such as cooling, heating, hot water, lighting, electricity are responsible for more than 60% of total GHG emissions in urban areas, which is extremely hazardous to the environment.
This makes it very important to create an alternative source of energy that can reduce energy costs and also optimizes energy consumption.
Installing solar energy is ideally suited for commercial buildings as they can use the readily available space in their rooftop to install solar panels. It can take care of around 30% of the building’s energy requirement including water heating, lighting, electricity, and solar cooling. Also, a building with an in-built solar energy source will help to generate revenue by selling the excess energy back to the grid providing good returns on investment.

Distribute & share energy
One of the key components of adopting solar energy is its ability to store excess energy produced during the day which can be used in night hours when the sun is down.
Also, the solar model can be implemented at large city infrastructures such as railway stations, airports, and large manufacturing facilities which have a large area for the installation of solar panels. These facilities will not only become self-sufficient but will also the option to sell extra energy generated to distribution companies.

Restores the Environment
Most of the businesses in the cities are dependent on interconnectedness, which can only be achieved with a stable and cheap source of energy supply. Since fossil fuels are hazardous to the environment with carbon dioxide emission levels increasing every day in the cities, adapting to solar energy is the best option for the cities. Also, solar energy is completely environment friendly and saves billions of dollars spent on sourcing conventional fossil fuel imports.

Emmvee has executed multiple projects across Indian cities
Emmvee is one of the premium manufacturers and suppliers of solar water heaters and PV modules with 25+ years of experience. It has strong expertise in executing large EPC and IPP solar projects with footprints across multiple cities in India. Its outstanding knowledge about designing customized projects and execute the entire infrastructure construction has made it one of the most trusted solar partners in India and across the world.
Emmvee has supplied more than 1.5 GW of PV modules manufactured at its state-of-the-art facility at Bengaluru, India which has a production capacity of 500 MW per day and solarizing more than 5 lakhs houses. Also, it has a strong track record and commissioning more than 200 MW of solar projects in India and across the world.

Some of the key projects include: