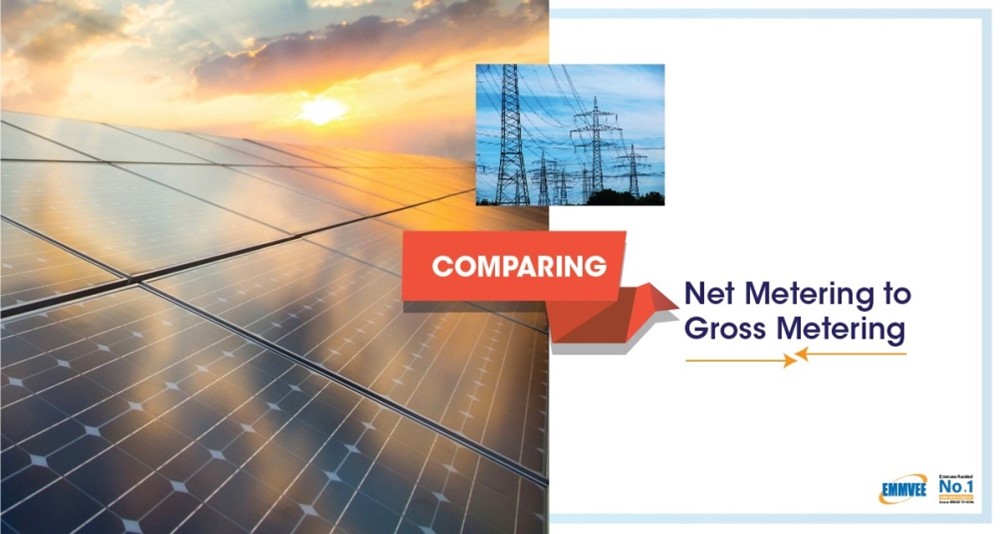 The decline in prices and policy incentives provided by some state governments has led to many consumers opting to invest in rooftop solar systems.

Most of the time the rooftop solar systems are connected to the grid to export the surplus power generated and to import the deficit from the grid given that it is expensive to maintain the electricity storage systems. These two arrangements are often defined by governments in rooftop projects as gross and net metering.

It is an arrangement where the consumer is provided electricity from solar systems exported from the grid at a fixed tariff rate on the total number of units consumed. The consumers are charged different rates for feed-in-tariff and retail supply tariff rates from Discoms.

In this system, the electricity exports are adjusted for the imports. This helps to lower the electricity bill such that the electricity produced is directly deducted from the total electricity consumption in a fixed period of time. The adjustment is carried out on either a monthly, half-yearly, or annual yearly basis.

The increasing awareness, easy availability of solar vendors, and relative reduction in the cost of implementing new solar projects has to lead to more and more consumers adapting to rooftop solar systems.

But many distribution companies are discouraging consumers not to install rooftop solar due to potential revenue loss especially under the gross metering arrangement. In the gross metering model, the compensation paid to consumers is much lower than the retail supply tariff charged by Discoms to buy electricity. But under the net metering model, the import of power is adjusted against the export and the compensation is effectively paid at retail tariff rates. This has lead to many consumers opting for the net metering model as it provisions for a better revenue protection model with exceptions found in some cases.

The Ministry of Power has given assurance to solar rooftop stakeholders that the government is considering reviewing its policy on gross metering installations which are above 10 kW capacities.

The present provision under the Electricity (Rights of Consumer) Rules 2020 puts a mandate for net metering loads up to 10 kW and gross metering loads greater than 10 kW.